He is most commonly seen wearing his high school uniform.

As described by Asakawa-san in Chapter 1, Rentarou is a kind, thoughtful and serious yet sociable boy who is easy to get close to. He knows how to study well and is relatively athletic. Rentarou is very easily impressed by his girlfriends' actions, especially when they do things that he finds cute. However, Rentarou is also very protective of his girlfriends and often needs to be calmed down should someone insult or harass any of them.

After being rejected by his crush (Asakawa-san) on the day of his junior high graduation, Rentarou had been rejected a total of 100 times in his life. After a bit of banter with his friend after his rejection, he goes to a matchmaking shrine and prays for the shrine's god to give him a happy high school life by letting him get a girlfriend.

To Rentarou's surprise, a god appears to him, phasing through the donation box. At first, Rentarou confuses the god for a donation thief, but he is told that he is actually the god of the shrine. The Love God tells Rentarou that he is to meet his "soulmate" in high school, and that they will fall in love at first sight.

After understanding how it all works, the Love God tells Rentarou that he has 100 soulmates. Rentarou is in disbelief at first, but the Love God confirms it to be true, saying that gods don't lie.

On his first day of high school, Rentarou bumps into his first two soulmates, Hanazono Hakari and Inda Karane in the hallway on his way to class. Locking eyes, the three of them all feel a shock running through their bodies. Rentarou understands that this was the feeling of love at first sight, but chooses not to say anything in the moment because he doesn't want to raise suspicion. Reaching his hand out to the two girls, he asks if they are okay, and Hakari, seeing an opportunity, acts as though she hurt her leg and asks him to carry her to the nurse's office, infuriating Karane. Rentarou starts crying and apologizing to Hakari, and she is immediately moved by his tears, seeing him as a "kind soul." When Hakari takes Rentarou's hand, Karane immediately blurts out that she doesn't want him to carry her and her hurt leg, which is clearly a lie because she's a tsundere. Rentarou doesn't catch on to the lies the two girls tell, and punches himself in the face to punish himself for badly injuring two people when he "barely touched them." He then has both girls hold on to him as he walks them to the nurse's office. While walking, they introduce themselves to one another, but, right after, the two girls hear a rumor from some passing classmates about a "love charm" in the school that supposedly will make a confession successful when given as a gift in a confession. After hearing this, Hakari and Karane forget about the lies they told about their legs and immediately run away from Rentarou.

After his first day of school, Rentarou stays a bit longer to help an elderly teacher find his lost contact lenses. After completing the task, he starts heading for the exit when he spots the two girls in the school courtyard looking for the four-leaf clover love charm. He is moved by the dedication that the two have, and decides to buy some soda for them. After buying the soda, he heads back to the courtyard to see that Karane is alone, still looking for the four-leaf clover. While giving her the soda, he finds out from Karane that Hakari had left to do something a few minutes earlier. Continuing to talk to Karane, he concludes that she is, in fact, a tsundere, and, a second after realizing this, she runs away, flustered. Immediately after Karane leaves, Hakari appears. He offer the second soda to her, and she decides to use the opportunity to ask him if he could drink half of it for her, saying that she couldn't finish the whole thing by herself, which was clearly a lie so that she could get an indirect kiss from him. Unfortunately for her, Rentarou had a feeling that she couldn't finish it on her own and happened to have bought a smaller drink for this situation. She then tricks him into giving her an indirect kiss by having him drink 15ml of the drink, making a big deal about how 190ml is not half of 350ml. In her excitement while drinking, she spills a bit of it on her skirt. Rentarou then offers his handkerchief to wipe herself with, but she grabs his hand and confesses her love to him. While Rentarou is in tears over the fact that this is the first time a girl has confessed to him, Karane appears behind him with 8 different canned drinks dropped on the ground. Karane attempts to pass it off, but admits she bought the drinks for him in return for the soda he'd given her, although she didn't know what he'd like and bought them all.

Karane and Hakari argue briefly, before they both confront Rentarou and ask him which of them he'll go out with. Rentarou dodges the question until the following morning, and spends the night trying to decide what to do. The Love God informs him that, if he only dates one girl, the other will die. So, Rentarou's only choice is to date them both, somehow. He briefly considers dating each one behind the other's back, but (literally) beats himself up for even thinking about it.

Instead, Rentarou spends all night in the courtyard, and meets with Karane and Hakari in the morning. Dirty and disheveled, he says he would like to date both of them, offering them each four-leaf clovers he spent all night searching for. The girls are initially reluctant, but eventually agree, and the three of them enter a polyamorous relationship. 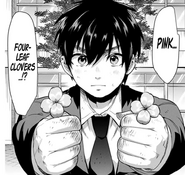 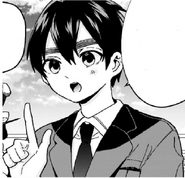