Nano is a tall and slender young woman with thigh-length white-blue hair that has bangs/hair strands hanging on the right side and sharp reddish-brown eyes.

Nano is practical to a fault, obsessed with solving a problem in the most efficient way possible no matter what.

One day, Rentarou, Hakari, Karane and Shizuka went to see the exam results when Rentarou then noticed that he forgot his phone in the classroom. When he came back, he saw a single girl who was still in the class, and asks if she wants to see the exam results with him, to which the girl responded in absolute refusal. The girl looked back at Rentarou and in an instant, the soulmate shock had activated. The girl explained that she did not need to check the results because she knew that she got the first position for sure. Rentarou then went to see the results and knew that the girl's name was Eiai Nano.

Rentarou then tried to have some friendly talks with Nano, only to discover that she was extremely cold because Nano considered having fun with other people was inefficient and insignificant. Unknown to Rentarou, Nano actually developed some feeling for him, up to the point that it made her unable to focus on her studying. Because of that, Nano decided to confess to Rentarou. However, when Rentarou accepted her proposal, Nano rejected him immediately. She then explained that she expected Rentarou to reject her so she could go back to her old self, but because he did not, she had to do it instead. Rentarou then convinced Nano to have a date with him before having her final decision.

On the date, Rentarou brought an instant camera, which he used to capture their moments. After the date, Nano admitted that she had more fun than she expected, but gained nothing significant. Hearing that, Rentarou decided to burn their photos and end their relationship. Surprisingly, Nano grabbed the photos and kept them from being burnt. Rentarou pointed out it was proof that Nano gained something so important that she wanted to protect it. Understanding that there are more important things that she needs to experience in life, Nano proposed again and Rentarou accepted. The next day, Rentarou introduced Nano to his other girlfriends, officially made her his 4th girlfriend.

Nano is the smartest among the girls. In her school exam, she gets the perfect score (700/700), which is better than the scores of genius-level characters in other manga. Nano has memorized hundreds of digits of Pi, which she sometimes uses to calm herself down. Due to her extreme intelligence and efficiency, in most difficult situations Nano is the first to come up with solutions. However, her solutions are sometimes brutal due to her lack of social experience.

Eiai Nano blushing near the end of Chapter 6

Eiai Nano at the very end of Chapter 9 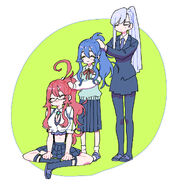