Hahari has very similar features as Hanazono Hakari, but with a more mature appearance and a mole below her left eye

Hahari appears as a very mature and sophisticated woman, until she sees something cute. She has an uncontrollable love for cute things, including children, as well as Rentarou and his family. When she sees something she finds cute, she may start drooling. Like her daughter, she is also a pervert towards Rentarou as she is shown to have perverted fantasies about him.

She is incredibly wealthy, and willing to throw her money around to get what she (or Rentarou) wants.

Although she fell in love with Rentarou, Hahari still deeply loves her deceased lover. She feels guilty about falling in love again until Rentarou comforts her and assures her that there is nothing wrong with loving more than one person.

When she was very young, Hahari fell in love with a sickly boy her age. He did not have long to live, and because of how much she loved him, she made arrangements with doctors to artificially inseminate herself with his genes in order to leave "proof of his existence". She gave birth to Hakari when she was 13 years old. The boy she loved passed away before they could even kiss.

Because of this experience, Hahari grew up jaded and constantly questioning if she was, or could be, happy without her love beside her. She devoted her entire life to Hakari, and vowed to not let anything cause Hakari the same pain that Hahari went through.

As a result, when Hahari finds out about Rentarou five-timing her daughter, she forbids Hakari from seeing him again. When Rentarou and his family sneak into her house in the middle of the night to steal Hakari away, Hahari is understandably angry, and only refrains from having them hurt because it would make Hakari sad.

She is initially resistant to believing that Rentarou loves Hakari, despite his vehement insistence that he does. Even after meeting his eyes and feeling the "soulmate shock", Hahari continues to resist her feelings and keep Rentarou and Hakari apart. It isn't until Hakari attempts to jump from her bedroom window, and Rentarou saves her by putting himself in danger, that Hahari relents and accepts not only Hakari's feelings for Rentarou, but her own as well. It is at this point that Hahari is brought into the family, immediately gushing over how cute Rentarou is.

Hahari buys the entire school and becomes chairwoman in order to stay close to Rentarou.

At first, she was very against him, thinking that he was a five-timing maggot. It wasn't until she met him that she saw him differently, realizing how he truly loves Hakari and his girlfriends. She then also became his girlfriend after he accepts her confession .

Hakari is Hahari's daughter, along with the only child of her former lover. She is very protective of her daughter, even willing to make Hakari hate her in order to prevent her from feeling the same heartbreak that she experienced.

Meido is Hahari's maid, who follows her with the utmost devotion and loyalty. Meido will defend Hahari with her life if necessary, without any hesitation. She is loyal to the point that, when she also falls in love with Rentarou, she refuses to pursue him because Hahari is in love with him. However, when Hahari tells Meido to be honest with her feelings, Meido immediately changes her tune and asks Rentarou out.

Hahari met her lover before her second year in middle school and fell blindly in love. Despite being ridden with a life-threatening disease, Hahari made arrangements with "the highest authorities of the medical field" at 13 years-old to leave proof of his existence.

Hahari is the richest among the girls. She is so rich that she bribed the highest-ranking medical staff to help her carry out artificial insemination at 13 years old. After becoming Rentarou's girlfriend, Hahari bought his whole school and made herself the chairwoman so she can be with him. Also Hahari has an I-Cup bust which makes her, just like her daughter Hakari, one of most curvaceous girlfriends. 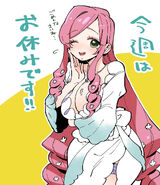 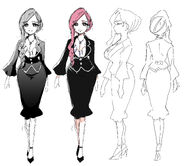 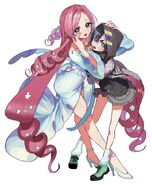