Hakari has shoulder-length pink hair and green eyes. She usually had white flowers in her hair, much like her mother. Also like her mother, Hakari is very well-endowed, a trait that some of the other girlfriends (namely Karane) envy.

Hakari loves Rentarou. She is described as "clumsy calculative" lady. She is often planning and plotting to achieve her goals which may or may not go as planned due to her clumsiness. She is prim and proper on the outside while inside she is just as degenerate if not more as the other member of Hanazono family. Hakari is also a big teaser towards Inda Karane often leaving her embarrassed or pissed.

Hakari met Rentarou while walking with Karane on the first day after bumping into him in the hall, both immediately falling in love with him at first sight. She pretends that her leg is hurt so that he could carry her all the way to the nurse's office.

After hearing the rumors that if you confess to someone while giving them a four-leaf pink clover, you will definitely succeeded. She and Karane spent the rest of the day trying to find the clover for Rentarou without success. Regardless, both her then Karane confessed to Rentarou. Nevertheless, Rentarou found the clovers and presented it to both of them on the next day while confessing that he wants to two-time them; they accepted. Hakari simultaneously became Aijou Rentarou's 1st girlfriend at the same time as Karane.

Hakari is the daughter of Hanazono Hahari and was revealed to be a rich girl. Her mother at first wanted to stop Hakari from dating Rentarou, but Rentarou soon convinced her otherwise.

Hakari has an G-Cup bust which makes her, along with her mother Hahari, one of most curvaceous girlfriends. With her breast size, together with her fine curves and sexiness, she outclasses most of other girls when it comes to body. 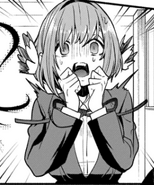 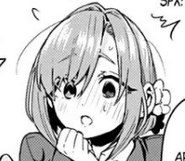 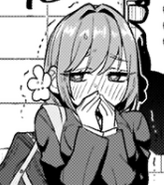 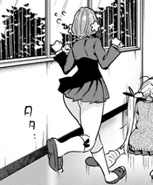