The JHS baseball team is made up of nine members and their unnamed manager. They all seem to be based on different species of dinosaur. Only two of the members are given names, but two other names are also mentioned.

The girls of JHS baseball team seem to be unnaturally strong, especially Terano. Terano is shown to have a fastpitch strong enough to knock a bat straight out of a batter's hands, possibly also injuring their hands in the process. 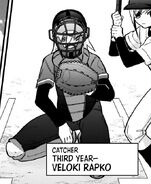