Meme has dark hair that reaches her mid-back, along with long straight-cut bangs that completely cover her eyes. She has a mole near her mouth, as well as a similar mole beneath her left ear. She wears a modest turtleneck beneath her school blazer, and dark pantyhose. She also wears a minimizing bra to conceal the size of her chest.

Meme is extremely shy, to the point of wearing masks to hide her face in order to avoid drawing attention to herself. She strives to keep her face hidden no matter what. Meme also enjoys knitting, and spends time knitting a lot of little stuffed animals. She uses these stuffed animals for "misdirection", in which she runs away quickly and leaves a stuffed animal as a distraction so no one sees where she went.

Meme first meets Rentarou as he's leaving the school to walk home on a windy day. The wind threatens to blow Meme's bangs out of her face, so she holds them down, and is so focused on doing so that she doesn't protect herself from a stray sign being blown directly towards her. Rentarou pushes her out of the way, but when she falls, her bangs fall away from her face anyway and their eyes meet. They both feel the soulmate shock, but Meme is so flustered by her face being exposed that the two of them get distracted.

Meme explains her shyness and her complex for keeping her face covered. Rentarou tells her that he thinks it's a shame because of how cute she is. Meme becomes embarrassed and runs away, leaving behind a small stuffed animal.

The next day, Rentarou gets a small stuffed Pentarou in his locker, along with a note from Meme thanking him for the day before. When Rentarou tries to approach her, she runs away again. Eventually, he manages to speak to her, and she happens to confess that she likes him, but this just embarrasses her further. She tries to run away, but eventually Rentarou is able to find her, and assures her that he will always find her, no matter where she hides. 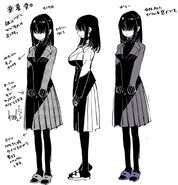