Mimimi is a self-proclaimed beauty, with long flowing blonde hair and narrow teal eyes with long eyelashes. Mimimi is also one of the taller girlfriends. She appears to have been the tallest girlfriend at the time of her introduction until Yamame's introduction.

Mimimi is very haughty and narcissistic, constantly complimenting herself and talking about her beauty. She is obsessed with beauty to the point that she takes it upon herself to make Rentarou beautiful as well once she meets him. While believing herself to be almost unparalleled in her looks, she is very competitive to the one person she admits surpasses her: Eiai Nano.

Despite her appearance of a naturally-beautiful rich girl, Mimimi actually works incredibly hard to provide for herself and keep herself beautiful. She works for herself to earn money, is frugal where appropriate so she can afford expensive, gorgeous clothing, and puts significant effort into her appearance.

Though she puts a lot of value on outward appearances, Mimimi also recognizes inner beauty when she sees it.

Mimimi first met Rentarou at a shopping mall. They made eye contact almost immediately, and Mimimi joyously took Rentarou's hand and gave him the "right" to date her.

Her initial attraction to Rentarou was primarily superficial, and she decides to give him a makeover after remarking he wasn't "suited" to date her looking like he did. However, after a slight altercation with some other mallgoers that ends with Rentarou protecting her from getting boba tea splashed on her, Mimimi recognizes that Rentarou is beautiful inside and out, and asks him out properly.

When Mimimi was in junior high, she took part in the same beauty pageant as Eiai Nano. Nano won first place, and while Mimimi was disappointed in her loss, she accepted it and attempted to make friends with Nano. Nano, however, dismissed her entirely, stating that friendship was "meaningless." This caused Mimimi to resent Nano for years, until they met again after Mimimi joined Rentarou's Family. Mimimi challenges Nano to a competition, with the punishment for losing being kicked out of Rentarou's Family. Through Rentarou's efforts, the two girls tie, and Nano apologizes for dismissing Mimimi. The two girls are able to become friends after this.

Mimimi is shown to be extremely fast on her feet due to her work as a newspaper delivery girl making her one of the more athletic members of the Rentarou Family. She also is talented at makeup and identifying outward and inner beauty. 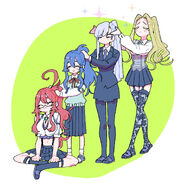