Yaku has a similar appearance to her granddaughter, Kusuri. She has turquoise eyes and long, straight red hair. However, her bangs are much more well-kept, and she has a smaller ahoge.

She wears a traditional kimono and wooden sandals.

Yaku comes off as a calmer and more mature version of Kusuri. She tends to act rather grandmotherly towards the others and seems to enjoy the youthful antics of the younger members of the family. She also is rather coy and tends to tease Rentarou.

Yaku is also easily confused by modern technology and refers to smartphones as planks. She also seems to be afraid of cars.

Yaku seems to have been born in the early 20th century (though there are references that make her sound older). Yaku's interest in the making of drugs and medical treatments seem to go back to World War II where she appears to have treated Imperial Japanese soldiers. During this time she met her husband, though she coyly refuses to go into detail.

It is not known when she gave birth to Kusuri's father or when her husband died.

The cover of volume 10 featuring Yaku and Kishika 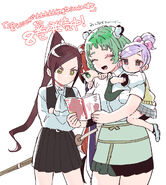