Nadeshiko wears a stereotypical cowboy outfit along with a hat and an American Flag Bandana. She has Dyed Blonde hair and turquoise eyes, though she originally had Black hair and would wear traditional Japanese kimonos every day.

Nadeshiko has a very freedom loving and stereotypically American personality due to her fascination with the United States, this was due to her finding and watching a VHS tape of a group of American Children acting in contrary to her family's strict traditional Japanese customs.

Nadeshiko would also hide the fact that she was really Japanese from people after getting kicked out.

Yamato Nadeshiko is the eldest daughter of the Yamato household, her family held strict Japanese traditional values and was forced to wear a kimono every day and learn Japanese arts such as learning to play the Koto. After being thrown in the shed after failing to play the Koto Nadeshiko discovers a VHS tape of American kids watching TV and doing things in contrary to the strict rules that were put on her like eating on the couch, wearing shoes inside, and drinking soda straight from the bottle. Nadeshiko would then be obsessed with freedom and American Values to the point where she changes her fashion sense an appearance, this would lead to her parents considering her a disgrace to both the family and Japan, kicking her out of the house in the process.

After Rentarou's Japanese teacher quit due to winning the lottery Nadeshiko (who called herself by Miss Naddy) was assigned to be the replacement Japanese teacher. After locking eyes with him and experiencing the "soulmate shock" Nadeshiko would ask Rentarou to stay after class with her, after some talking he would figure out that Miss Naddy wasn't an American as she self-proclaimed and was in fact Japanese.

Despite pretending to be an American, Nadeshiko does not seem to be able to shake off her traditional Japanese upbringing. She is shown to very well versed in nearly anything Japanese including traditional style of dance, Enka singing, and even some ability using a sword during her match with Kishika. Based on her introduction chapter Nadeshiko seems to have some ability to play the koto.

She does not seem to be able to speak English despite her love of America.

The name Yamato Nadeshiko comes directly from the term "yamato nadeshiko" (やまとなでしこ), which refers to the "personification of the idealized Japanese woman". A yamato nadeshiko is typically demure and polite, with long dark hair often styled neatly, dressed in traditional Japanese clothing. 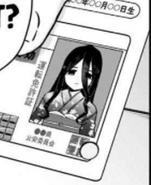